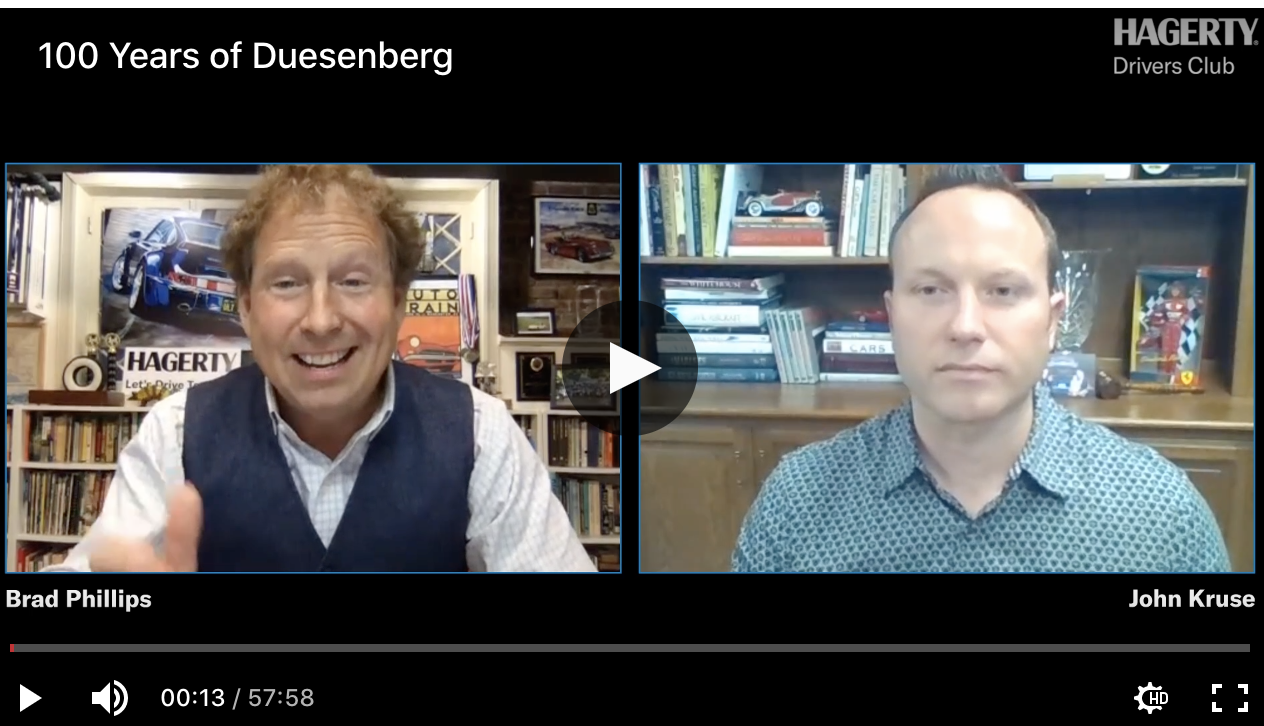 There’s a reason that the phrase “That’s a Duesy” has been reserved for the biggest and best, no matter the object or subject. The Duesenberg Model J, introduced to the world in December 1928, was arguably the finest American automobile ever built. And that’s exactly what E.L. Cord had in mind when he purchased Duesenberg Motors in 1925 and asked brothers Fred and Augie Duesenberg to help him create the ultimate luxury car.

John Kruse, principal and auctioneer at Worldwide Auctioneers, grew up in Auburn, Indiana, right where it all began, and still lives there. He is well-versed in Duesenberg history and refers to the automaker’s original headquarters—home to the Auburn Cord Duesenberg Museum—as a “treasure.” Kruse and Hagerty’s Brad Phillips discussed “100 years of Duesenberg” (starting with the Duesenberg Model A) in an hour-long Hagerty Drivers Club livestream earlier this week.

“The pinnacle is E.L. Cord connecting with the Duesenberg brothers and saying, ‘Hey, I want to build the grandest American car, period’—and that is the Model J,” Kruse says. “When you think about it, that’s a pretty tall order, (and in) pretty much everyone’s opinion, they nailed it …

“If you were a wealthy person from ’29 into the ’30s, and you could buy whatever you wanted, you bought a Duesenberg.”

Make no mistake, Kruse says, Duesenberg built quality automobiles prior to the Model J. “The [1921–26] Model A is a great car. It’s just that the J is such an incredible car that we sometimes forget the significance of the A.”

While the Model J is often noted for its many technological advancements, the A was the first automobile in series production to have hydraulic brakes and the first production car in the U.S. with a straight-eight engine. The very first Model A ever built has been completely restored and now resides in the ACD Museum.

And then along came the Model J. It was unveiled just eight months before the stock market crash, which began on October 24, 1929 and sent the U.S. (and the rest of the world) into the throes of the Great Depression.

The J was a 20-foot-long work of art: curvaceous, regal, and powerful. Its huge 7.0-liter DOHC straight-eight engine produced 250 horsepower and could propel the 4000-pound J to a top speed of 116 mph. Despite costing $8500 for a chassis and engine (that’s just under $130,000 today)—and the fact that a finished car could cost $13,000 ($200,000 today)—the J remained in production throughout the Depression, which speaks to its overall quality and desirability.

Phillips points out that the wealthy buyers of the Model J were looking for the fastest, most-technologically advanced, and most beautiful car that money could buy—and it was an American car, to boot. Ordering one, Phillips says, wasn’t as simple as “going down to the local Duesenberg showroom and saying, ‘I like the blue one.’ They’re going to sit down with blueprints [and create the exact car they want].” And that meant sending each one to a coachbuilder.

Kruse says, “Really you were buying a chassis and an engine, and you were saying, ‘What are we going to do with it?’” That customization made for long wait times, and considering the time and expense involved, Model J owners meticulously maintained their cars and held onto them for years.

“That care and attention has transferred to owners now,” Kruse says. “A lot of people have owned them for a long time, and I think that’s a testament to the car … when you buy a Model J, there’s just nowhere to go from there.”

Noting that the Duesenberg brothers started out building race engines and race cars in the early 1910s, Phillips mentions the record-breaking 1935 Mormon Meteor, a modified one-off built on a standard 142.5-inch Model SJ chassis. Built by Ab Jenkins, under the supervision of Augie Duesenberg, the car was originally powered by a supercharged, DOHC straight-eight, but when it just wasn’t fast enough, Jenkins installed a 750-hp Curtiss Conqueror V-12. The car averaged more than 153 mph over 24 hours, setting a new record.

“It’s pretty impressive, pretty incredible,” Kruse says of the Meteor. “[When you sit in it] it’s almost like the car is alive and ready to perform.”

Kruse and Phillips discuss much more during the livestream, including the most popular Model J version—the dual-cowl phaeton—and the significance of the ACD Museum.

“No question, the most epic highlight of the museum is walking into that showroom … I get chills every time because this is the real deal,” Kruse says. “This is not recreated; nobody put in a bunch of money and said, ‘Let’s make it cool.’ This is it. To have that as a national treasure—an international treasure—is awesome.”

Kruse marvels at the creative partnership between the Duesenberg brothers and E.L. Cord. “It’s great to see not just American ingenuity and drive to build and create, but to see those brothers and an entrepreneur like Cord come together to create things,” he says. “It was a team then; it takes a team now; and I think it’s a neat human story to watch those things come together to create something so special.”