From The John Wolsiefer Sr. Collection


Recognizing the need to be competitive in the emerging sporty-car market, Ford introduced the Thunderbird in 1955 as a direct answer to Chevrolet’s Corvette. Although similar in size, the major difference was that the Thunderbird was more comfortable than the Corvette, which made it a pleasure to drive. While Chevrolet was trying sell left-over Corvettes from 1954, Ford’s Thunderbird was almost driving itself off the show room floors. With its sleek styling and V-8 power, the public couldn’t get enough of Ford’s new wonder car. Perhaps the success of the Thunderbird was found in the fact that it wasn’t marketed as a sports car, but rather as a “personal luxury” car, a niche that had previously been undefined in the U.S. automobile market. Many thought that the Corvette and the Thunderbird would do battle for many more decades, but the Thunderbird took an abrupt turn in 1958 becoming a four-seater car. This left the two-seater market all to the Corvette and the rest, as they say, is history.

The original incarnation of the Thunderbird lasted for just three years and in the last year, 1957, it had become a highly refined car with great styling. A slight fin kept it updated and the standard continental spare tire of 1956 was now gone. Offered here is a great example of this iconic American car in this 1957 Thunderbird that’s finished in Ford’s classy Colonial White with red interior. This Thunderbird was restored three years ago and has been driven a mere 800 miles since. It rides on chrome wire wheels with wide whitewall tires for the classic 1950s look. Thunderbirds were restyled for 1957 and a rear section made for more trunk space. Overall length was reduced though as the spare tire now resided in the trunk. The Thunderbird name was scripted on the front fender and eight slanted chevrons denoted the eight-cylinder power within. Hardtops now carried a porthole for visibility and the rear carried two large tail lamp pods with the exhaust exiting through the rear bumper. Ford was never onboard with the gargantuan fins of the 1950s and the Thunderbird for 1957 carried a streamlined and opulent fin that did not detract from its overall design. Ford updated the Thunderbird’s interior for 1957 by using the instrument panel from the 1956 passenger car line and an engine-turned inset that brightened up the wraparound dash. The red leather interior in this Thunderbird is in excellent condition and looks today just as it did in 1957. Power for this Thunderbird comes from 312 cubic-inch V-8 with 245 horsepower that easily propels this 3,134-pound car to modern highway speeds and beyond. Ford built 21,380 Thunderbirds for 1957 and actually left some money on the table by not being able to build more. In the present day, the 1957 Thunderbird is a car that represents an era in automotive design that has long passed, but certainly not forgotten. Indeed, the first generation of Thunderbirds has long been considered a collectible automobile not only for its design, but also for its performance.

The 1950s come alive again in this spectacular example of Ford’s Thunderbird. After all, who could forget Suzanne Somers in her brief, but pivotal role in the 1973 George Lucas film American Graffiti behind the wheel of a 1956 Thunderbird. In hindsight, Ford moving the Thunderbird over to a passenger car was a great move as it turned out to be a very popular car in the 1960s. This spectacular first-generation Thunderbird with its outstanding restoration and remarkable condition is a car that stands ready for the local show or the open road.

Fill out the form below, email us at info@worldwideauctioneers.com, or call us at (260) 925-6789 to get more information on this lot. 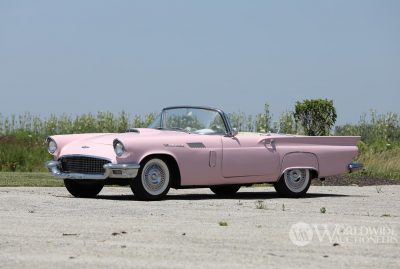 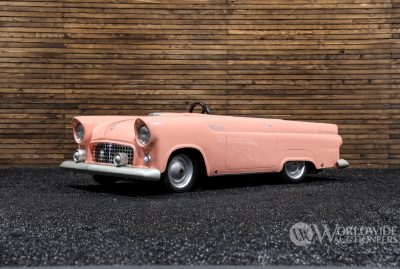 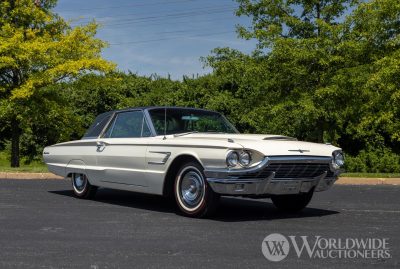